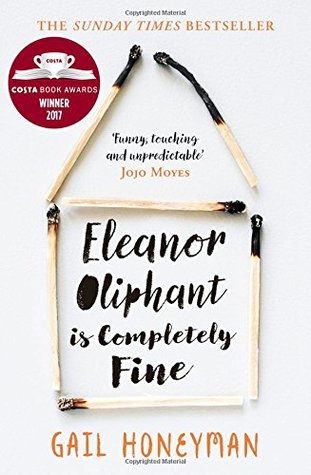 Eleanor Oliphant leads a well ordered life, at least during the weekdays when she works at a graphic design company. If anyone asks her about her job, Eleanor just tells them that she works in an office. She is competent at her job, though not well paid.

Eleanor grew up with ‘Mummy’. Mummy’s main concern in life was how to behave correctly and what others thought about her. Even approaching her 30th birthday, mummy’s influence still held a huge sway over Eleanor’s life.

Eleanor’s work is relatively undemanding for her level of intelligence; she holds a degree in classics. She has colleagues at work but no real friends either in work or out. Her weekends away from work are dulled by vodka in an attempt to pass the time more quickly, or at least to not constantly notice time’s passing. Eleanor Oliphant is lonely and her well ordered life isn’t what it seems to the casual observer.

An incident on the way home from work one day, with a colleague not long joined the company, begins to change Eleanor’s life in unexpected ways. Eleanor and the company IT expert, Raymond, helped and old man who had collapsed in the street.

Some professional reviews refer to this book as “funny”, which I must disagree with though it does have touches of humour.

Gail Honeyman’s character Eleanor Oliphant gives a poignant glimpse into a kind of loneliness I would not wish to experience or endure. It also shows just how much difference even a little kindness can make to one person.

In her debut novel Gail Honeyman gives an absorbing read, with a couple of nice twists in the tale. Clues to the twists are there for the attentive reader to find. I picked up on one twist. the other came as a surprise.

“I’d learned that money was something to worry about, to ration.”

One thought on “Eleanor Oliphant Is Completely Fine”

This site uses Akismet to reduce spam. Learn how your comment data is processed.

I am not a professional reviewer so make no claim to review objectively, it’s what I think and feel about the books however good or bad others might consider them.